Willem van Genk (1927–2005) was born into a Catholic family, the tenth child and only boy after nine girls. His life was not an easy one: at primary school he had serious learning disabilities and later, he was often dismissed from the jobs he held. At the end of 1965, he was admitted to the Royal Academy of Art in The Hague. His admission was considered exceptional — a newspaper article even appeared on the subject. His time at the art academy was far from exemplary, but his life as an artist had begun.

Van Genk’s earliest works were detailed panoramas of cities. These were followed later by oil paintings on panels that had been nailed onto each other and many sketches that reflect his fragmented world. The work of The Netherlands’ most famous outsider artist is autobiographical. In almost every piece, we see the torrent of thoughts that lived in him. The complexity is infinitely fascinating. After a while, the viewer sees the connections that he experienced, such as those between the steel roofs of stations and spiderwebs, between criminality and sexuality, or fascism and communism. Shooting gangsters, books, parades, maps, trains, trolley buses, murders and executions: his imaginative body of ideas flows colourfully over his drawings and paintings.

A solo exhibition called ‘WOEST’, showing more than 60 works by van Genk, was held at the Museum van de Geest | Outsider Art between 2019 and 2020. Several of his works are included in the museum’s collection.

The documentary ‘Ver van Huis’ (Far from Home) is about Willem van Genk. In which Dick Walda talks about his friendship with Van Genk.

In the summer of 2020 Smita and Jennifer, vloggers of Thuismuseum, visited the exhibition ‘WOEST’. Watch their findings on this.

Want to see more of Willem van Genk? More of his artworks can be seen on this website. 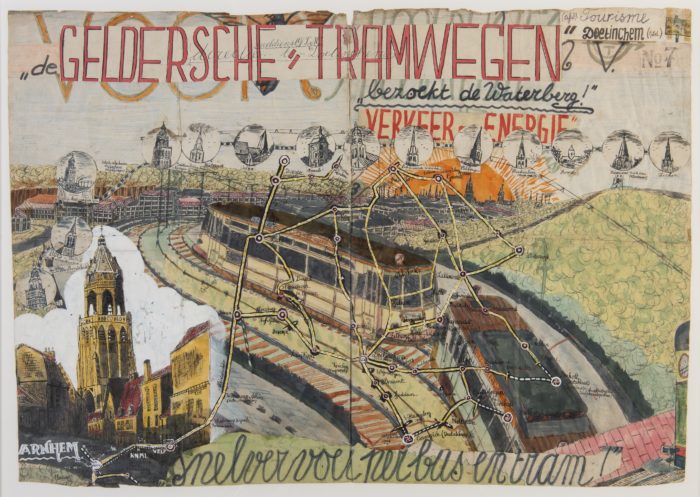